A month ago, I said goodbye to the last of the spring harvest and looked forward to enjoying our summer fruit.  With the erroneous concept that the garden was self-sufficient, Hubs and I took off for a week on our first real vacation since I arrived in Austria.  What we discovered upon return was fascinating.

Some things flourished, came to fruition, and began to out-compete their neighbors for resources. 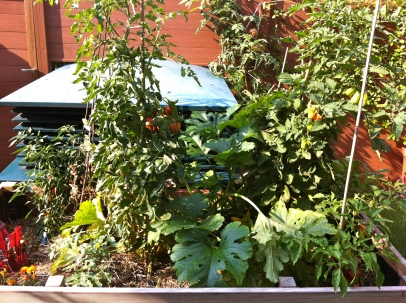 The explosion of color that welcomed us home – amazing what can happen in a week.

This San Marzano is such a heavy producer that I really only need one well-maintained plant for our two-person family.

The Russian Black produces a fair amount of very large fruit but I’m not a fan of the texture and I was expecting a much darker color.

Never again will I plant a zucchini in my bed; it’s getting it’s own pot next year!

I’m so happy to actually harvest sweet peppers this year! Austrian summers are so unpredictable and these plants are so picky; I’m just happy with my four!

I finally put the tree that is shading out my herbs to good use – protect my salad from the scorching overhead sun. Of course, this will not work for a head of lettuce but at least we get to enjoy some tender greens this summer.

Pots of domesticated and wild arugula and some edible flowers (that I actually never eat – they’re too pretty!).

Sweet potato (never a surety) and rhubarb (gotta find a good compote recipe for next year). 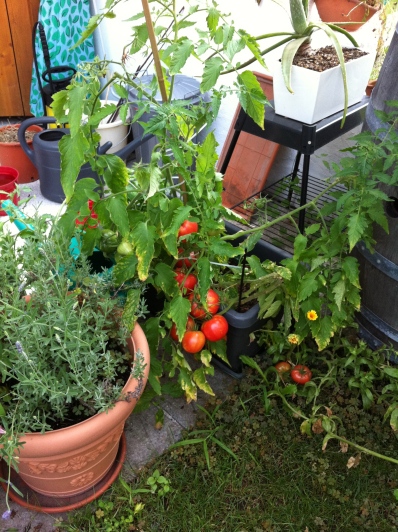 The Zeiglers Fleisch tomato that I kept on a pot on the terrace produced a smaller size than the one in the bed (the smaller the pot, the smaller the tomato).

Spanish lavender getting ready to put out blooms again.

The tiniest and most determined sunflowers ever!

Some found the fight a bit too hard, while others ‘caught their second wind’ as we faced an invasion from the neighbors – amazing what obstacles plants will overcome to get what they need, isn’t it?!

These clay pots in full sun are a death sentence to any plant – considering cacti for next year. 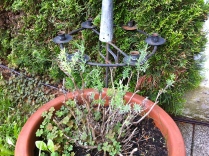 Look who made it – my English lavender that I nearly killed by pruning too deeply.

An enigma – when I leave this artichoke plant to be infested by aphids it grows well; when I try to defend it, it dies. I don’t even water the thing anymore – maybe we will get a homegrown artichoke this year after all!

Interesting new development – my neighbor’s squash plant is taking over the hedge.

But let’s not forget the most important part – the harvest & tasting!  While I delight in observing the plants’ interaction and reaction with their environment, Hubs is focused on the ROI – how big, how much, how tasty!

Here’s the Black Russian with just a bit of salt for a quick snack. 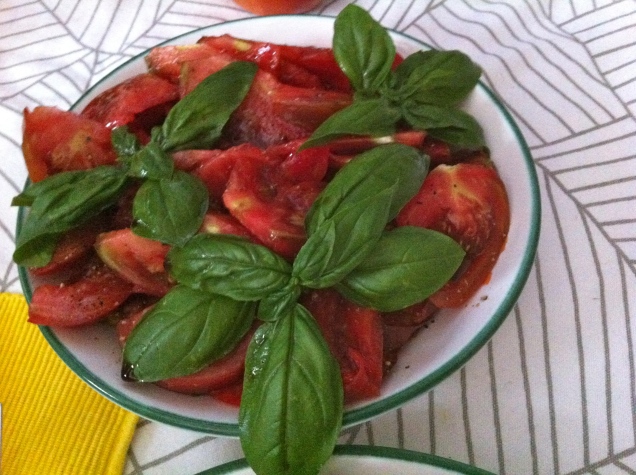 In the weeks since our return, there’ve been additional harvests and growth but the most worrying variable has been the weather.  Austria summer is unpredictable, for lack of a better word.  The sweet pepper plant was laden with young fruit and blossoms – all but four of which were lost to a cold snap.  The hibiscus showed its displeasure via yellowing and falling leaves.  I have no idea if the sweet potatoes will have a decent harvest this year, despite a much bigger and deeper pot.  One just never knows and currently, we’ve got decidly Fall temps at the moment.  However, rather than worrying about what can not be changed or influenced, we’re enjoying ‘the here and now’ and considering what (and when) we’ll put in our Fall plants.

Here’s how the garden looks now and a bit of what we’ve been enjoying. 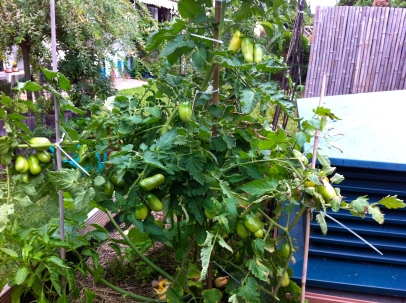 The San Marzano sauce tomatoes are producing so well that the plant split in two places due to the weight. 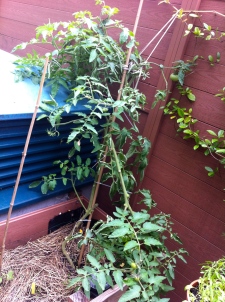 The Black Russian also suffered a split due to weight issues. 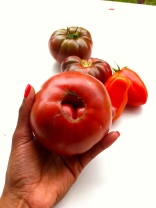 While the Russian creates huge fruit, I’m not a fan due to texture, flavor (it’s ok, in my opinion), and the fact that (like most heirlooms) it’s prone to catfacing… 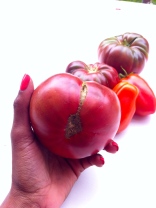 and zippering. I also expected it to be much darker – these are vine-ripened and never got any darker.

Both Zieglers continue to produce proliferically but it’s also prone to blossom rot, catfacing, and zippering.

The zucchini is producing many flowers but the positioning is so bad that I’m having to fertilize by hand. Also with so little space, the leaves are blocking the sun from the fruit (who knew the fruit needed the sun to develop); I’ll be happy just to get one zucchini this season. This plant is so getting its own pot next season!

Wonder of wonders, the sweet pepper is producing new potential blossoms. Holding little hope with this weather however. 😦

My champ, the chilis – hot and thin-skinned enough to preserve through drying. 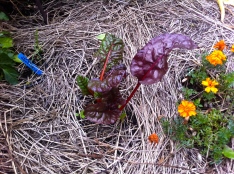 I’m not sure what’ve done wrong but the chard leaves never really get to full size. Still tasty in salads as a raw green. 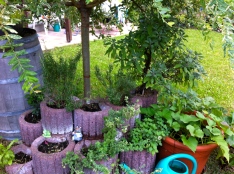 Despite the beauty, under the tree is the worst spot for most of the herbs; hope they’ll survive being replanted again. I’ve already lost the chives.

and the fruit of this vine will be interesting to taste. 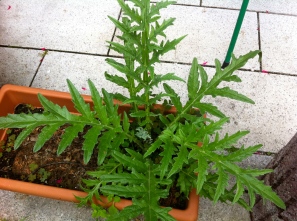 Artichoke is still thriving without interference from me.

The rhubarb has more leaves than I’ve ever seen at one time. 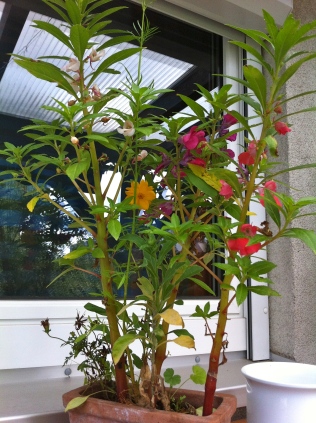 Desite being rather heat sensitive (could be the fault of the rather tiny clay pot), these flowers have quickly become one of my favorites. 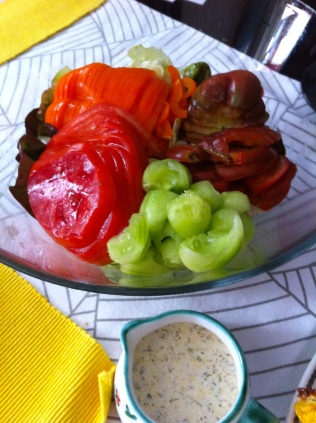 A quick salad with the Black Russian, the Zieglers, one of the sweet peppers, a few chopped Chard leaves, and a cucumber (from my FIL’s garden) with a yogurt dressing.

I am a Bahamian woman, married to an Austrian man, who's been freshly transplanted to Vienna. I started writing this blog when a dear friend insisted that I had to write down my experiences. At best it'll update my buddies on my crazy-going-ons and at least, it'll keep me from stalking them online (LOL). I hope you enjoy :D
View all posts by A Bahamian In Austria →
This entry was posted in My Garden and tagged balcony gardening, fresh produce, gardening, growing artichokes, growing sweet potatoes, Rainbow Chard, Russian Black Krem, San Marzano tomato, Ziegler tomato, Zucchini. Bookmark the permalink.

17 Responses to Summer Has Left Austria