At the very last moment while harvesting raspberries the other day, my eyes focused enough to realise that the berry I was about to grasp was in the possession of a very large (but thin) spider that was just waiting to bite me – at least that’s how it played out in my head.  Since then, I’ve been rather wary where I put my hands (and feet) when I’m in the garden as bugs kinda creep me out!

Creep factor notwithstanding, bugs are a gardener’s friends.  Since (or because of) my near-bite experience, I’ve become more aware of quite a few visiting and residing insects and I’m glad to see them, in a rather twisted sort of way.  It’s a rather simple concept really, just like humans, insects want to live comfortably.  They need food, shelter, water, and the assurance that their young have a viable chance for life.  When these things aren’t available, they move.  So basically, a garden with insects is a healthy, happy community.  Of course, a balance between pests and predators is required.  So, to some extent, I can live with a few holes in my leaves – as long as the stay away from my lettuce!

There are a few predators that visit daily; namely, dragonflies, that are just too fast to get a good picture of.  I always ensure there’s a shallow dish of water around for them; although the wasps seem to have claimed it for their queen.  Oh well.  There’s a type of wasp that predatorial, and I’m hoping mine are since they’re drinking all my water. I’d also like to see a praying mantis or two; but I’d like to see it before I actually touch it because I think that might even beat a wasp sting.

Anywho, check out who’s been flitting around my little patch of green this week. 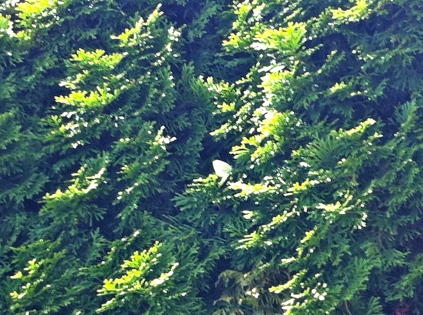 Butterflies! Swift visitors that flit around, visiting flowers and sometimes my lettuce. They’d better not lay any eggs there! 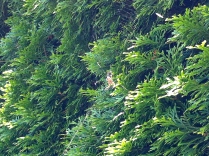 Spiders, lots and lots of spiders! Normally creep me out, but they’re keeping every other bug in line. 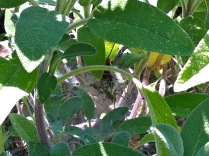 First line of defence hanging out in my sage; actually there are two of them there. 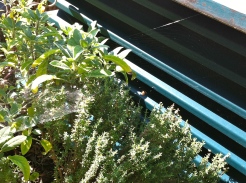 Holding down the fort between the thyme and sage.

Also in the rosemary. Seems that wherever there’s lots of plant debris, I find spiders. 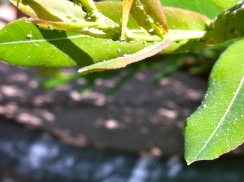 These things irk me so – aphids! Sap-suckers! Finally got them off my spinach and now they’re on the willow. Well, the willow’s older and stronger so it’ll have to handle it. 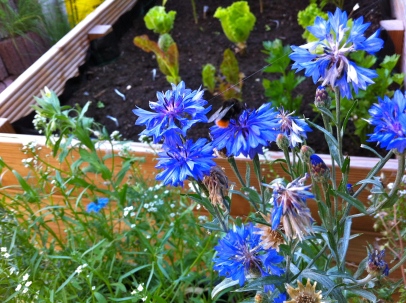 Bees pollinate my flowers and those on the tomato and peppers. Just have to be careful not to startle them – one sting is quite enough. 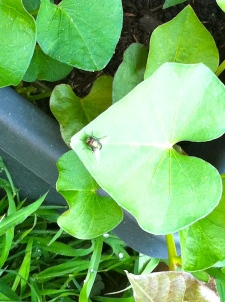 Flies visiting the sweet potato – no idea why. 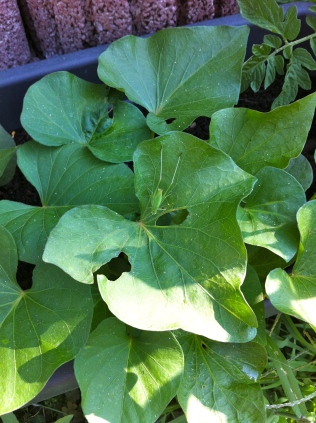 I had no idea that grasshoppers ate leaves! I thought they were carnivores but apparantly, the sweet potato leaves are delish! These stealth professionals are pretty easy to miss. 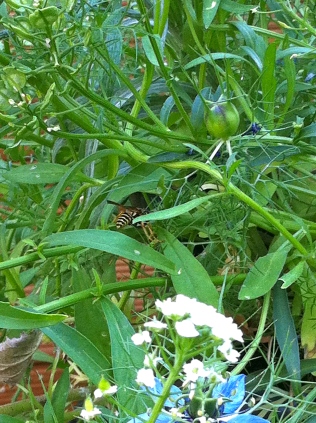 Wasps collect water from everything! Doesn’t bother me but I really don’t want to get stung; that would be worse than a bee-sting! 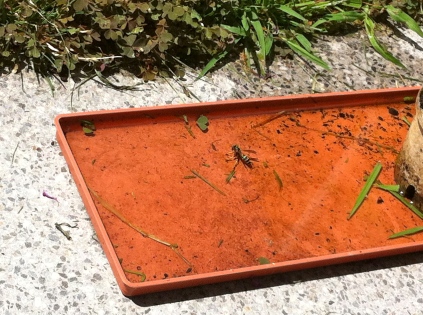 I’ve observed wasps collecting water from my water tap, in the grass and also here in the plant underdish. Never walk in the grass without shoes! 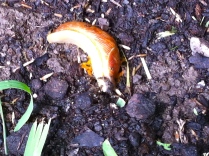 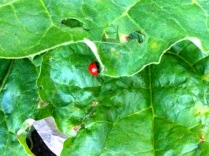 My favorite because they and their kids eat tons of sap-sucking aphids. Normally, when they’re one ladybug, there are dozens more around which is good news for the willow; it can use all the help it can get! If you look closely above the ladybug, you’ll just make out a sneaky, camoflauged grasshopper enjoying his dinner.

I am a Bahamian woman, married to an Austrian man, who's been freshly transplanted to Vienna. I started writing this blog when a dear friend insisted that I had to write down my experiences. At best it'll update my buddies on my crazy-going-ons and at least, it'll keep me from stalking them online (LOL). I hope you enjoy :D
View all posts by A Bahamian In Austria →
This entry was posted in My Garden and tagged ants, aphids, bees, butterflies, flies, garden insects, gardening, grasshopper, healthy garden, insects, ladybug, slugs, spider, wasps. Bookmark the permalink.