My A1+ German course ended last week Wednesday and the cold marched over from Russia and took up residence in Austria.  Temperatures dropped from the usual 4°C to an unrelenting and bitter -15°C and hovered there.

As I am on vacation for a week and a half, I opted to hibernate in my cozy cocoon – sleeping, Skyping with my mom, and catching up on my music videos and my German magazines.  I’d thought to take the bus to Burgenland to visit my MIL, which would’ve been a new experience for me as we always drive there, but time kind of ran away from me.

Following the advice of a good friend from home to get out and do something, I decided to join my gfrd, V, and a couple of her visiting friends from England on the last day of their stay. Here’s a pictorial of my walk around Vienna: 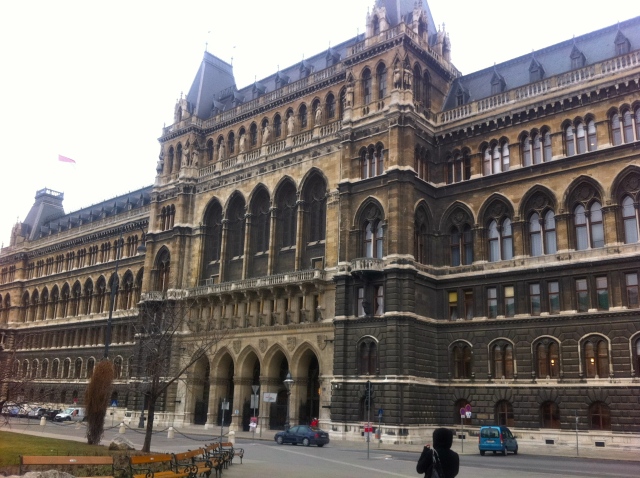 Met our little troop at the Rathaus (City Hall) in the first district at about noon with the day’s high temp of a blistery -12°C accompanied by a good stiff wind.  Thankfully, I was wrapped up in a fur vest with hood and a suede thigh-length jacket so I was ok.  I did berate myself for choosing leather riding boots because the cold just worked its way up through the soles and I soon lost all feeling in my toes.

Yet, despite the weather, folks were having a great time enjoying Vienna Ice World at the Rathausplatz (City Hall Square).  Hubby and I have been meaning to get out there but somehow or the other just haven’t made it yet – despite specifically going out and purchasing new ice-skates. 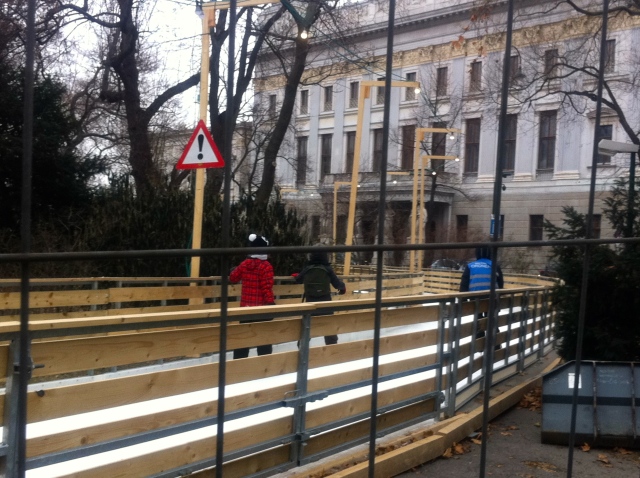 The rink opens up into a path that meanders throughout the square.  It must be so romantic at night, gliding along arm-in-arm, past eons old buildings under twinkling Christmas lights and stars!  Definitely on the to-do list when he gets back.

We crossed the street to view the Parliament Building and take a few snaps.

And this is about where my fingers defiantly staged a coup.  We’d only been outdoors for about 5 minutes and it was so cold we all just said, “Yeah, we’re done.  Sightseeing is just not that important today!” 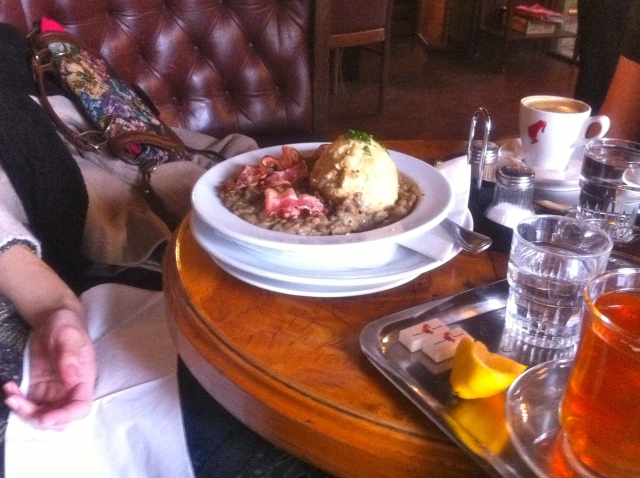 We found a little cafe a block away on Auerspergstraße within which to warm up and regroup our cheer.  V enjoyed Linsen mit Speck und Semmel Knödel (lentils with bacon and a bread dumpling) while the rest of us sipped coffee or hot chocolate in the charming little establishment. 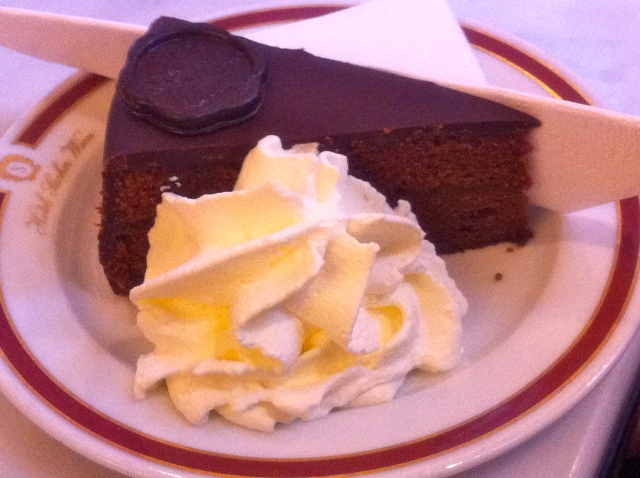 After we’d defrosted, one of my new friends demanded chocolate cake to which I responded, “Well, if you’re in Vienna and you want chocolate cake, you’ve got to try the Sacher Torte” and off we trooped to Philharmonikerstraße. Seated in a window seat in the Sacher Cafe, which adjoins Hotel Sacher, we agreed it was definitely a touristy thing to do – but what were we if not tourists; besides I wanted to help make their last day in Vienna pleasant.  Personally, I’m not a chocolate fan; however, I firmly believe that it’s only fair to form an opinion on a subject when you’ve experienced the original.  Our resident chocolate fiend thoroughly agreed and enjoyed. 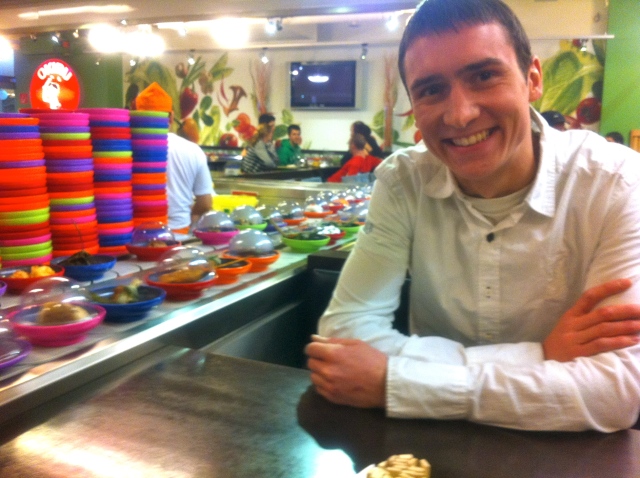 After seeing our visiting Brits to the airport and sharing farewells, I headed out to ‘Running Sushi’ in Lugner City on Gablenzgasse in the 15th district with a fairly-new buddy, C, who hails from Germany and speaks fluent German and English.  Although I have a few Austrian friends, our schedules rarely allow for frequent meet-ups and often German speakers, wanting to improve their English, tend to shy away from German with me.  With C, two great opportunities presented themselves; German practice and a new dining experience.

‘Running Sushi’ is a Asiatic restaurant that offers little portions of a variety of gastronomic offerings – practically everything (sushi, noodles, steamed dishes, pot-stickers, etc) is available.  The dishes are freshly prepared and placed on a conveyer belt that cycles through the entire restaurant.  We paid a flat fee (about €15, excluding drinks) and simply picked up what struck our fancy and as much of it as we liked.  When I chose something new and found that I didn’t like it, I simply put it aside and chose another delicacy.  I’ve been to a number of sushi restaurants but this one was unique and fun – I’ll definitely be back.  Here’s a cute video posted on Youtube showing the conveyer belt perspective of the restaurant and a few of the dishes I tried. 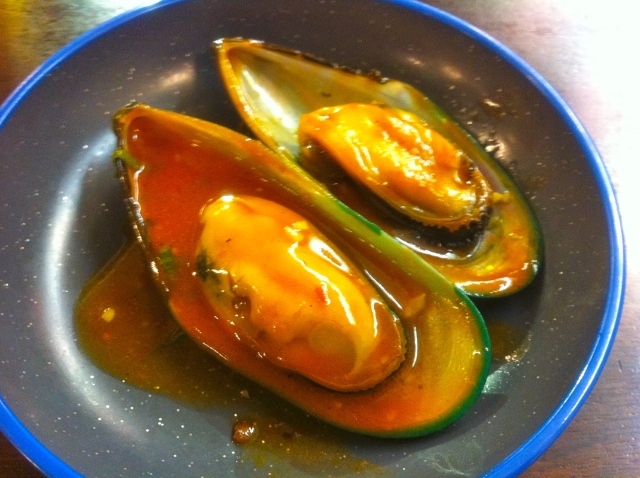 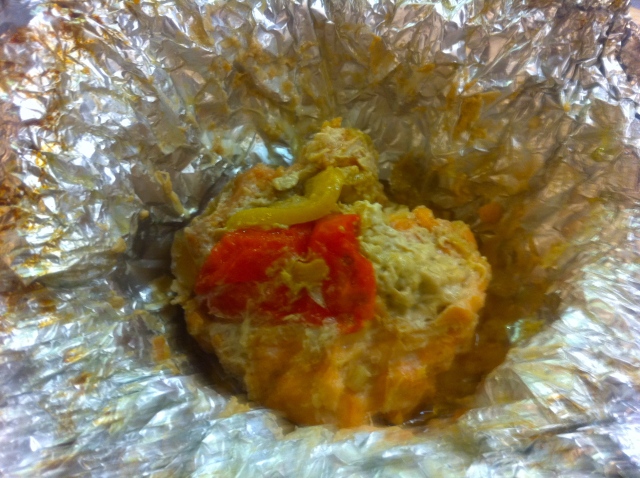 Salmon with veggies and herbs steamed in a foil.

The cold finally gave way to snow that night.  I happen to love snow and was delighted, on the way home, to be able to snap a few pictures of my surroundings covered with a fairly undisturbed covering.

On the Burggasse Platform waiting for my train. 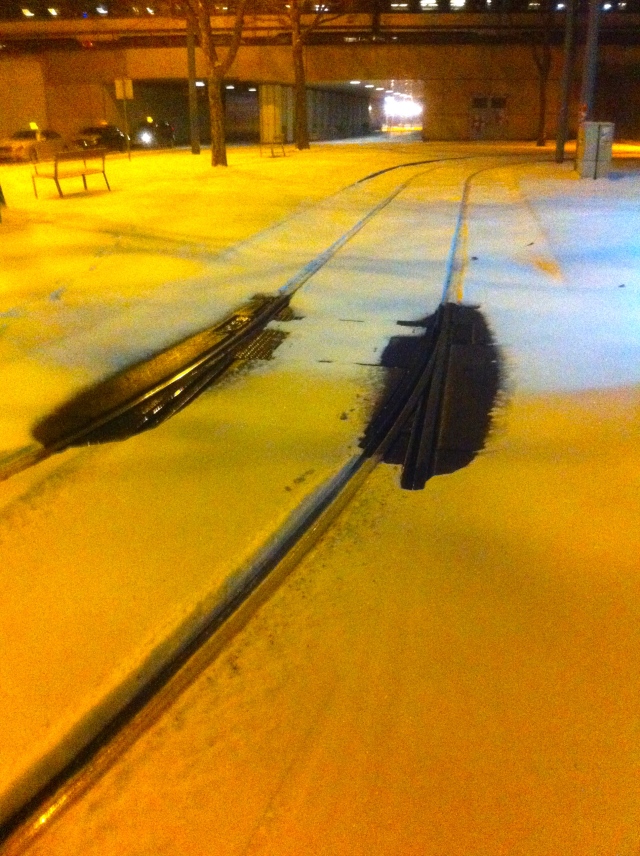 Straßenbahn (street tram) tracks nearly covered except for one spot that always melts. Those melted spots are the reason I never step on the tracks even though everyone says the electricity that powers the trams are overhead. 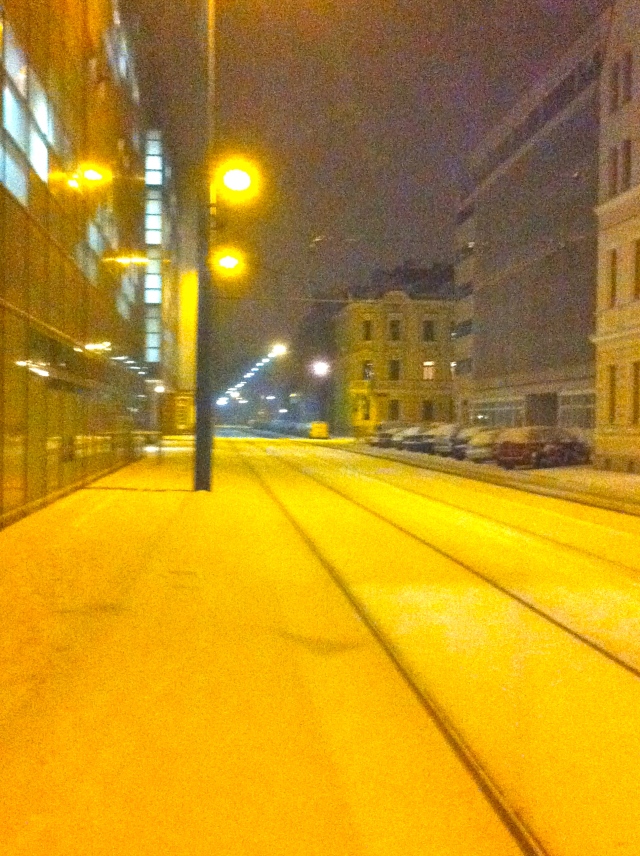 My street bathed in the cleansing beauty of snow.

My poor surviving plants (rosemary, bay leaf, and thyme) may have finally met their match. I awoke this morning to find my balcony swaddled even deeper in snow - seems it fell all night and continued until about midday.

I am a Bahamian woman, married to an Austrian man, who's been freshly transplanted to Vienna. I started writing this blog when a dear friend insisted that I had to write down my experiences. At best it'll update my buddies on my crazy-going-ons and at least, it'll keep me from stalking them online (LOL). I hope you enjoy :D
View all posts by A Bahamian In Austria →
This entry was posted in Sights and tagged expat in Vienna, personal blog, running sushi, Sacher Torte, Vienna, Vienna Ice World, walk around Vienna. Bookmark the permalink.

Getting to the ROOT of change